Five years ago the Transcendental Meditation technique was introduced at Norwich University in Vermont, the oldest private military college in the U.S. They began with 30 cadets and now there are 300 at any given time practicing TM on campus. 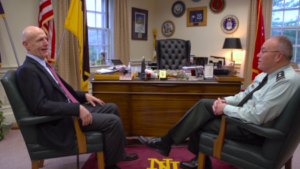 Founded in 1819 near Montpelier, Vermont, Norwich University has educated young adults to become leaders in the community, in business and in the military. It has the distinction of being the birthplace of the Reserve Officers’ Training Corps (ROTC).

After reviewing articles and research from the David Lynch Foundation Dr. Schneider said, ”I was reluctant—skeptical—but the more I learned, the more confident I became.” After presentations from the David Lynch Foundation, he saw TM as a way to prevent stress and help with focusing and clearing the mind. He decided to be the first to learn TM saying, ”You have to lead from the front . . . ”

In collaboration with Norwich’s board of trustees, the university directors decided on a trial research project for TM. The idea of participating in the trial was presented to all incoming students and their parents in 2010. Thirty new students learned TM and thirty were in a non-meditating control group.

For the TM group after learning, ”the reaction was dramatic,” says Dr. Schneider. A typical comment from a student on learning TM: ”After the first week of practicing it, you felt a difference, you felt calmer and much more aware of your surroundings, and you could focus.” Another said, ”TM is the greatest tool that I’ve had for stress-management and for keeping clarity in my life.” Since then the program has grown. Today Dr. Schneider says there are currently 300 TM participants at the University.

Major General (Ret.) Stephen Rippe, a member of the NU board of trustees, says, ”[TM practice] is part of an overall healthy lifestyle. You work out, you take care of your body, you do Transcendental Meditation, it helps you take care of your mind. The powerful part of that is that it actually, physiologically improves your brain functioning.”

Referring to their extremely full day, one young woman said that ”after I do TM, I just get it done instead of sitting around being overwhelmed by so much to do.” 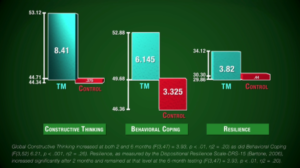 Staff and faculty are also practicing TM at Norwich University. As a student says, ”people here want to do what works—we see it as a tool that enables us to handle stress.” Dr. Schneider concludes, ”I think it should be made available to every college student.”

The Food Ranger | The Love and Life Changes of Trevor James

All You Need. Larger Than Life. We Are Earth.